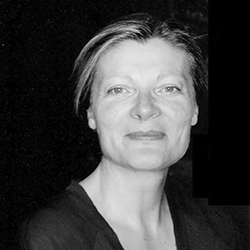 Born in Paris, 1950, Michèle Le Gallo has been living and working since 2001 in Meung-sur-Loire, near Orléans (Loiret).

Prize-winner of the Institute (Académie des Beaux-arts, Paris), winner of a gold medal, Corot prize and Grand prix of the Salon des Artistes Français in 1989, she was also awarded the Galerie Tenri prize (a Franco-Japanese association in Paris) in 1990, and the Artistes Orléanais prize in 2006

As a materialist painter and great admirer of Miquel Barceló and Antoni Tàpies, she works on wooden pieces (collected in the nearby Sologne), as well as on linen canvas and papers, using a mixed technique and thus combining acrylic or oil-based pigments, various patinas, inks and copper foils. As she often seeks after gilding effects, she’ll gladly accept references to Gustav Klimt, although she refuses to confine herself to the figurative or the abstract, as evidenced in an article of the Benezit professional directory, written by Annie Pagès in 1994 : “Michèle Le Gallo equally favours figurative and an abstraction which, though it may be organic or mineral, always seeks effects on stacked layers of materials”.